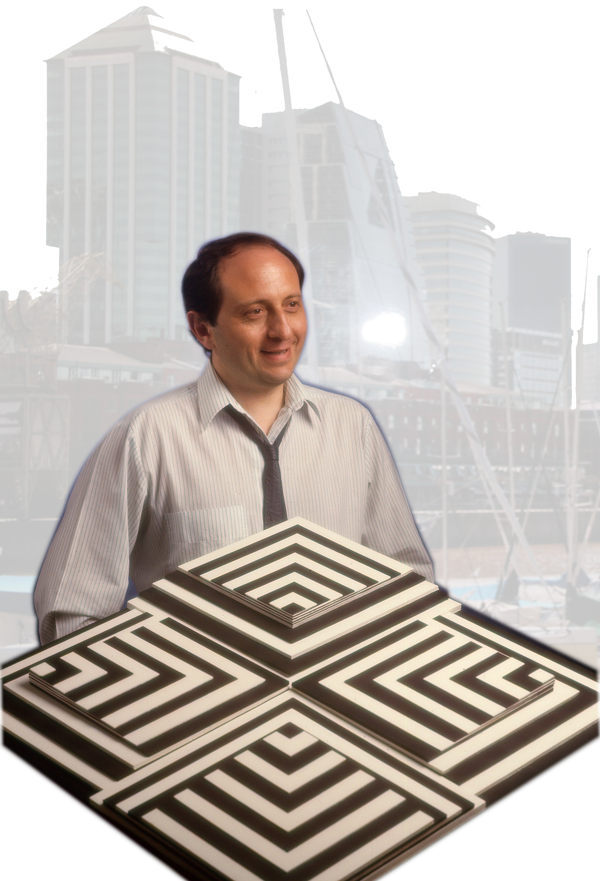 Ovaldo Bacman, born in La Plata, Argentina, showed very early a precocious learning towards art, to wich he dedicated every minute of his free time.

Concurrently to his studies, he did special courses for children and adolescents in the ‘’Graduate School of fine Arts’’, wich was part of the University of La Plata and where he learned the basic concepts of painting, after which he directed himself towards Cubism and Concrete Art.

He visited Madrid, Barcelona, Rome, Milan, Venice, and was specially interested in Florence and Paris. This great visual and spiritual experience accentuated his inspiring force.

Since 1976  Bacman lives in Germany. In Düsseldorf until 1992 and then in Nürnberg until 2009. Since 2009 he has been living and has  working in his atelier in the city of Cologne, where he also exhibits his artworks.

He was granted the German citizenship in 1987.

His artistic evolution stands out in three very diferents phases.

Between 1976 and 2003, he discovers for himself the ‘’Language of Geometry’’, first in its ‘’two-dimensional’’form and after a log experimentation process in its ‘’three-dimensional form, developing the concept of the ‘’Third Dimension’’, reflecting in three-dimensional objects.

In 2004 and until 2008, he creates the images of his series called ‘’Microcosm’’, inspired in the ultrastucture of the human cell.

From 2009 on and already in his atelier in Cologne, Bacman is seduced and inspired by the multiple expression possibilities and the beauty that come from the combination of ‘’ORNAMENTS’’

The group of works ‘’ORNAMENTS’’ is composed of two series:

” Spiritual and Intellectual Space of Geometry“

At the present time the artist is working on a group of large format pictures: “The mystery of geometry”

Osvaldo Bacman is a member of the ‘’Art Society of Cologne’’